For Halloween I’ve decided to build a robot using only junk laying around the house, a bit like Frankenstein, but with a robot.

Full project including component details can be found on Hackster.

Let’s take a closer look. Starting from the bottom, we have the tracks allowing Jake to move around. You can see the two DC motors in the bottom and the two axis in the front. The tracks connect both gears to create his tracks. It’s all mounted to the body with some pieces of scrap wood, screws, rope and a lot of hot glue.

Side view of Jake’s tracks

The body is an old metal trashcan painted two different kinds of silver, some safety tape and fridge magnet letters. All glued in place for extra strength. 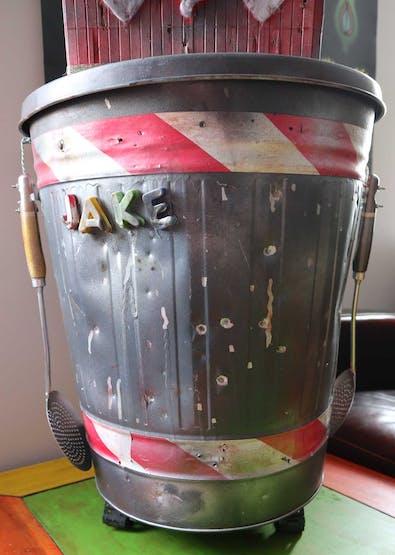 His head is an old box, with some styrofoam eyes, a beard with mustache and a speaker for yelling. As a nice bonus, he can open his head up for extra storage! After cutting a hole in the trashcans lid we can fit a servo attaching it to the box so he can move his head.

To give Jake the worn down look, I’ve used a hammer, paint, a pellet gun, a lighter and many more. I’ve followed roughly the steps outlined here. It’s a lot of fun!

All the electronics are in his chest, in a box, mounted with two screws.

See below for wiring schematics (crude).

Jake is controlled by this keypad, you can find all the code in the attachments.